"A 3D Mammogram Saved My Life!" 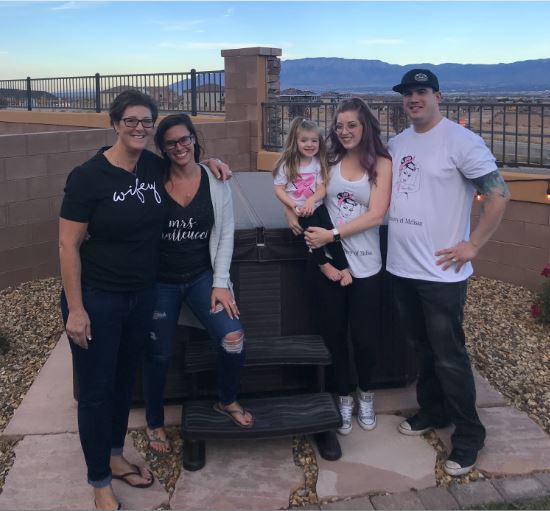 As the director of diagnostic services at Lovelace Medical Center, Rita Matteucci, 50, has always made her preventative health screenings a priority.

An annual mammogram is still to recur on Matteucci’s calendar, and this year was not different,  landing on August 3, 2018 at Lovelace Women’s Hospital Breast Care Center.

Dr. Timothy Erwin, a radiologist at Lovelace Women’s Hospital, couldn’t help but notice something off about Rita’s images.

“Dr. Erwin couldn’t get past this one little spot that was on my 3D mammogram,” explained Rita. “You could only see it on the 3D mammogram and you couldn’t even visualize it on my 2D mammogram.”

Dr. Erwin was able to compare the images from Rita’s previous 3D mammogram. The questionable spot on Rita’s right breast was new so further imaging was needed.

At that point, Rita knew the spot was very concerning.

“Typically, radiologists do the extra views and if the concerning area doesn’t go away, they do an ultrasound. At that point, it should rule out whether or not it is cancer. I knew he was concerned,” she said.

Accompanied by her fiancé, Janelle, Rita returned to the Breast Care Center for her biopsy, which would determine if the spot was cancerous.

A day later Rita received a phone call that changed her life.

“It’s hard to hear that you have breast cancer, and the next anticipation is finding out what type of breast cancer. Working in healthcare, you know the worst case scenario,” said Rita.

In the midst of planning her October wedding, Rita was diagnosed with Grade 1 Stage 1 breast cancer. “I received good news when I found out it was not in other breast and that there was no lymph node involvement,” she shared.

“The team worked with me to schedule my surgery so I would be healed and recovered before my wedding. Everyone was so wonderful,” shared Rita.

Rita had a lumpectomy performed by Dr. Calvin Ridgeway on September 14, 2018. Rita’s tumor was eight millimeters in size. “It was so small that it they told me it had only been growing 6-9 months.”

“Although this came out of left field, I am so fortunate that it was caught it so early,” shared Rita. “I cannot emphasize enough how important it is for women to get a 3D mammogram.”

Rita expressed her appreciation for Dr. Erwin and the support from her cancer care team at the Lovelace Cancer Center. “Dr. Erwin is so good at recognizing the differences in women’s breasts between what he thinks is normal and abnormal,” said Rita. “Everybody has been so caring and compassionate. They just ease your anxiety and give you the whole picture of what to expect.”

One thing that Rita is certain of is that a 3D mammogram saved her life.

“If it wasn’t for the 3D mammogram, the cancer wouldn’t have been detected this early,” explained Rita. “A 3D mammogram saved my life! I can’t stress enough that women need to be aware that this technology is out there, and they need to seek out 3D technology.”

“You can’t believe the amount of friends I have sent to go get their mammogram after this experience!”